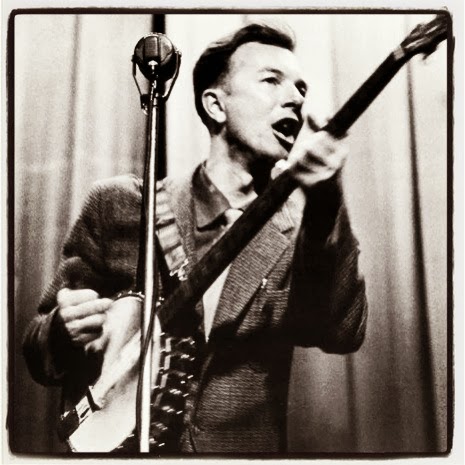 Pete Seeger has died at the age of 94. He released over 100 albums in his lifetime and literally changed course of American music, all while working to preserve, protect, and celebrate it.

His was a uniquely epic life—classmates with John F. Kennedy at Harvard in the 1930s (Pete would drop out after two years); rambling around with Woody Guthrie in the 1940s (where Guthrie's "This Machine Kills Fascists" sign on his guitar inspired Seeger to put "This Machine Surrounds Hate And Forces It To Surrender" on his banjo); scored huge hits with The Weavers in the 1950s ("Goodnight, Irene" toped the charts for 13 weeks in 1950); served as MC of the Newport Folk Festival when Bob Dylan went electric and allegedly threatened to cut the amplifier cables with an ax in the 1960s (he claims it was because of the muddy sound, not the gesture of Dylan plugging in); made a rare television appearance on The Johnny Cash Show in the 1970s (the two men duetted on the old Carter Family tune "Worried Man Blues"); played a benefit show for Ralph Nader in the 1980s (among countless other environmental and political concerts he gave during this time); received the National Medal Of The Arts from President Bill Clinton in the 1990s (along with a Grammy Lifetime Achievement Award and an induction into the Rock & Roll Hall Of Fame as an "Early Influence"); sang with disciple Bruce Springsteen at President Barack Obama First Inauguration in the 2000s (Seeger and The Boss sang Guthrie's "This Land Is Your Land"), and marched with Occupy Wall Street in the 2010s.

He has been called many things over the years—a singer, a songwriter, a hero, a communist, a traitor, a rebel, a pioneer, an activist, a filmmaker, a keeper of the old guard, a living legend, and finally, a national treasure.

Pete Seeger is and was all of these things and more—and less—sometimes several at a time. His life plays out like a real-life experiment in American reinvention, Melville's Confidence-Man for the radical 20th Century. How else does one explain the fact that the nation's leading singer of folk music came from the New England elite and attended Harvard? If he spent his life establishing his credibility as a man of the people—which he did, and then some—it would be a remarkable life; the fact he became a musical icon while doing so is a near miracle.

He was often less a singer of songs than a leader of them—his own ideals about equality perfected as a stage show. Seeger's wavering tenor was often the match that lit the flame of the audience, and some of his most powerful performances found him leading the crowd in the songs, holding out long, countermelody phrases as the audience sang the melody. He wasn't just performing American music, he was quite literally bringing it to life.

I have a good friend who saw Pete Seeger in the mid-'80s and heard him say something, which Seeger wrote out for him after the show upon his request:

Beginning by paraphrasing Shakespeare and ending with a wise warning to the future, Seeger had summed up the strife he fought against in four short lines.

With such knowledge—through words, through song, through protest—we can surround hate and force it to surrender.

Take it easy, but take it. 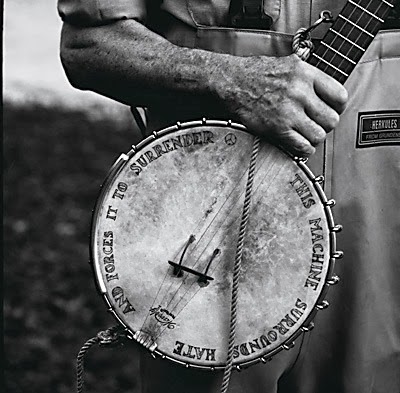 Posted by Eric Wolfson at 11:23 PM No comments: Don't get me wrong, they pop up in the most likely of places, too—in the Rock & Roll Hall Of Fame (one of the first 10 inductees in 1986, alongside Elvis Presley and Chuck Berry, among others), on Rolling Stone's 100 Greatest Artists list (at #33, beating out the likes of icons such as Michael Jackson, Madonna, and David Bowie), in the 1,001 Albums You Must Hear Before You Die (1961's A Date With The Everly Brothers, the Warner Brothers debut LP that had their (third) #1 hit "Cathy's Clown" on it), and pretty much any essential rock song or album list that's worth a damn—but it's the unlikely places that seal their legend.

Ray Charles kicking off his massively-influential Modern Sounds In Country & Western with a cover of "Bye Bye Love" in the early 1960s; Elvis Presley crooning "Let It Be Me" in his initial Vegas comeback shows in the early 1970s; Nick Lowe and Dave Edmunds cutting an EP of four Everly Brothers songs as a sidebar to their legendary new wave band Rockpile in the early 1980s; Elliott Smith name-checking "Cathy's Clown" in the opening lines of his devastating "Waltz #2 (XO)" in the late 1990s; Robert Plant and Alison Krauss covering "Gone, Gone, Gone" as the lead single to their Grammy-winning hit Raising Sand in the late 2000s; and finally, Green Day's Billie Joe Armstrong and Norah Jones recording a song-for-song "cover album" of The Everly Brothers' 1958 LP, Songs Our Daddy Taught Us, late last year.

At the core of The Everly Brothers' appeal was their signature "high and lonesome" harmonies that were straight from country music. Don sang the main lower melody parts, Phil the trickier high countermelodies. If they did nothing else but set the par for all rock harmonizing to come (which they did), this would be reason enough to enshrine them in rock's canon.

Just listen to John Lennon and Paul McCartney, whose co-vocal sound on their early Beatlemania hits like "She Loves You," "I Want To Hold Your Hand," and "Please Please Me" takes the Everlys' sound and places it in a contemporary British sound (and indeed, The Beatles once referred to themselves as "The English Everly Brothers" in an early interview). Even in their later years, the influence remained, as they broke off from recording the late-period close-harmony original "Two Of Us" into an impromptu cover "Bye Bye Love."

The Everly Brothers planted the seed for all great rock harmony groups and singing, from The Beach Boys (who covered "Devoted To You" on their Party! album in 1965) and The Byrds (who directly noted the Everlys' influence as they were making their first country records in 1968) on down. And it wasn't just harmony groups. Bob Dylan once said of the Everlys: "We owe these guys everything. They started it all."

Compared to a chart-monster like Elvis Presley, this is chickenfeed, but compared to most of their other contemporaries, this is quite impressive—consider Jerry Lee Lewis, Little Richard, and Buddy Holly, each of whom only had three Top 10 hits total in this period, let alone three number ones—and speaks to their key influence and hit sound. For although The Everly Brothers were steeped in country, it was in a decidedly rock and roll package, as masterminded by the densely-layered productions in songs like "Bye Bye Love" and "Wake Up Little Susie" that were largely masterminded by Chet Atkins. What sounded like little two- and three-chord rockabilly stompers were in fact a forceful punch of rhythm and beat that were almost impossible to copy.

Which isn't to say that no one tried to. In 1957, a meek duo from New York City copped the Everlys' sound and style, calling themselves Tom & Jerry and scored a minor #49 hit with the "Bye Bye Love" knockoff "Hey Schoolgirl." It was enough to get them on American Bandstand the following year (right after Jerry Lee Lewis played "Great Balls Of Fire"), and provide a taste of success.

A half-dozen years and a thousand ages later, the two teamed up again in 1963 as a folk duo and went by their real names: Simon & Garfunkel. More than any other rock legend of the '60s, Simon & Garfunkel were the clearest inheritors to The Everly Brothers' beautiful, close-harmony sound—not to mention their brother-like quarreling that has led to long periods of silence between the duo. The irony wasn't lost on Paul Simon:

You know, the Everlys have a long history of knocking each other down, as brothers can do. So in a certain sense, it was hilarious that the four of us were doing this tour, given our collective histories of squabbling. And it's amazing, because they hadn't seen each other in about three years. They met in the parking lot before the first gig. They unpacked their guitars—those famous black guitars—and they opened their mouths and started to sing. And after all those years, it was still that sound I fell in love with as a kid. It was still perfect.

Simon is referring to The Everly Brothers' feature sets in his 2003 reunion tour with Garfunkel, in which he provided a way for his idols to "take a bow" after quietly retiring in 2000.

It would be their final bow. Phil's widow told the Washington Post that his older brother Don Everly was too upset to talk: "He always expected he'd go first."

With Phil's death just weeks before what would have been his 75th birthday, rock's most influential duo has been silenced forever.
Posted by Eric Wolfson at 1:45 PM 1 comment: