Johnny Cash At Folsom Prison At 50. 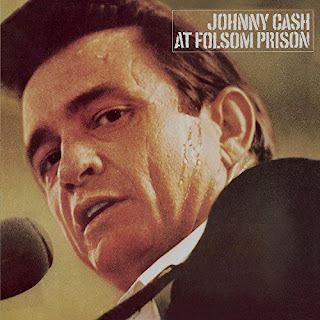 Fifty years ago today, Johnny Cash recorded the concerts that would provide the basis for one of the most celebrated albums in American music, At Folsom Prison.

The idea of the concert itself proves nearly irresistible--The Man In Black staring down a prison full of prisoners as his audience--no wonder it provided the focal point of the well-intended but overrated (& historically shoddy, it must be said) I Walk The Line film in the early '00s.

Many have noted that his setlist wasn't one of his traditional hits, but rather a few hits surrounded by B-sides & album cuts, love ballads & murder ballads, work songs & folk songs, spirituals & novelties. This wasn't so much a tour of Johnny Cash's country music as it was a tour of Johnny Cash's country's music. For everything that America may or may not have been to its citizens in the revolutionary days of 1968, Johnny Cash's At Folsom Prison played like the eye of the storm, a study of America held up & stripped down to its core.

America, it loves to tell itself, is The Land Of The Free. This is not lost on anybody, least of all Johnny Cash.

"The culture of a thousand years is shattered with the clanging of the cell door behind you," he writes on the back of the LP. "Life outside, behind you immediately becomes unreal. You begin to not care that it exists. All you have with you in the cell is your bare animal instincts."

Cash notes later in the essay that he speaks from experience, having been behind bars a few times in his own life. But certainly he never experienced anything like the convicts of Folsom Prison.

Aside from Henry David Thoreau, America is not one to celebrate its prisons; as the land of the free, it stands to reason, these are the people who have failed America, or, perhaps, America has failed. Either way, it plays like a camera obscura of what's supposed to be The Land Of Opportunity.

So what does Johnny Cash have to say to these people? He doesn't pander, he doesn't preach, he doesn't patronize. He seems to have an uncanny ability to place himself in their shoes & provide the range of material they hunger for. He knows that this is not just entertainment, but a piece of home--of America--that he alone can provide.

He throws them a few murder ballads, the first of which, "Folsom Prison Blues" both opens the concert & provides its peak--just listen to the roar that is evoked by the line "I shot a man in Reno, just to watch him die." Although "Folsom Prison Blues" is perhaps Cash's most famous song now, it was originally recorded at Sun Records in 1955 & released as a B-side to his first Top 10 country hit, "So Doggone Lonesome."

By the time he recorded this version of the song some 13 years later, he was on Columbia Records, who released this live version from At Folsom Prison as a single, where it gave him his first #1 country hit in four years.

But "Folsom Prison Blues" wasn't the only murder ballad in the set--there was also the rousing "Cocaine Blues" which gave the inmates another classic line at which to roar ("I took a shot of cocaine & I shot my woman down"). In between was Merle Travis's classic coal mining lament, "Dark As A Dungeon," & the prettiest song of the set, "I Still Miss Someone," which sounds like it was a major hit but was actually only released as the B-side to "Don't Take Your Guns To Town" in 1959.

He then goes into the first novelty song of the set--the crazy countdown of "25 Minutes To Go," a literal dose of gallows humor penned by songwriter & children's poet Shel Silverstein (who would later write one of Cash's biggest hits, "A Boy Named Sue," which itself spawned one of the greatest novelty song titles in history, "A Girl Named Johnny Cash," but I digress).

Already in five songs, we have gone from murder ballads to work songs to love songs, back to murder ballads & then a comedy song. Next stop? One of Cash's favorite thematic genres: The train song. Cash goes into "Orange Blossom Special," originally written by Ervin T. Rouse in 1938 & most famous from Cash's #3 hit version in 1965. For all of the train songs he recorded--& by this point, he had literally recorded two albums worth--he went for the one that was the biggest hit.

The first side ends with "The Long Black Veil," which was written in the 1950s to sound like an ancient folk song. Most people just assumed it was & gave Lefty Frizzell one of the biggest hits of his career in 1959. The same year that Cash sang it at Folsom, The Band introduced it to the rock world on their debut Music From Big Pink.

"The Long Black Veil" is about a man who is accused of murder & is hanged for it because his alibi would reveal an affair with his best friend's wife. It is she who visits his grave in a long black veil. As a murder ballad-turned-love song, "The Long Black Veil" may come midway through the album, but the defines its conceptual limits. It conjures a small-town America that could come straight out of Hawthorne's pen, but paints a picture in which love is a death sentence. Cash appropriately has sent the band away & sings it solo, just his voice & acoustic guitar.

The second side opens with the next song his solo set, "Send A Picture Of Mother," which was written by Cash himself. If "The Long Black Veil" was a modern country song disguised as a folk ballad, "Send A Picture Of Mother" was a new song masquerading as nineteenth-century parlor music. It was a saccharine ode to a man's mother, & did not sound too far off from those old post-Civil War songs that were later bastardized into Carter Family folk standards.

Next up was Harlan Howard's "The Wall," about a prisoner who tries to make a breakout that the singer reckons was actually an act of suicide. Cash had previously recorded it in 1965 as part of his Orange Blossom Special LP.

Then, as to not dwell too long in the darkness, Cash throws in two novelties by Sun Records jack-of-all-trades "Cowboy" Jack Clement: "Dirty Old Egg-Sucking Dog" & "Flushed From The Bathroom Of Your Heart." They are perhaps the weakest part of the whole set, but at least they gave the prisoners a much-needed hearty laugh.

Cash then calls back out his band, accompanied by his future wife (& current mistress) June Carter, who, as the second generation of The Carter Family, was country music royalty. They duet on "Jackson," their #2 country hit from the previous year that blows away the studio version with a performance that is at once fiery, flirty, & hilarious.

The two then duet on "Give My Love To Rose," another B-side, this time for Cash's old Sun Records single "Home Of The Blues" in 1957.

Then it's off to the old Lead Belly standard "On A Monday" (here recast as "I Got Stripes"), an old prison work song that was surprisingly one of the few hits on the album, as Cash hit #4 with it in 1959; here, the ringing chorus of singers & the band bring it to an odd place somewhere between a folk song & a musical number.

The finale is a song written by a convict at Folsom Prison, "Greystone Chapel," & Cash gives it a serious & reverent reading. Glen Sherley, the author of the song, was in the front row for the concert, unaware that Johnny Cash was going to play--let alone close with--his song. The moment inspired him to write more songs, but despite help from Cash, he could never adjust to life outside of prison & committed suicide at the age of 42 in 1978.

In a way, Sherley's untimely passing frames the entire album.

Death is everywhere on the LP. By my count, there are at least three murders (the man in Reno in "Folsom Prison Blues," the woman in "Cocaine Blues," & the "someone" killed in "Long Black Veil") & two executions (the singer of "25 Minutes To Go" & the singer of "Long Black Veil), plus a third who's about to be executed (the singer of "Green Green Grass Of Home"). At least one person is in the midst of dying (the man on the roadside in "Give My Love To Rose"), while another is killed in an apparent suicide ("The Wall"), & yet another pictures their eminent death from their work in the coal mines ("Dark As The Dungeon"). One entire song, "Long Black Veil," is sung by a corpse.

Even the throwaway novelty of "Dirty Old Egg-Sucking Dog" ends with the singer dreaming of killing his dog.

& with "Greystone Chapel" as the finale, there's a touch of hope, of spirituality, of redemption.

All put together, At Folsom Prison has enough episodes, adventures, tragedies, & laughs to fill a hundred dimestore western pulps. Each one is rendered all the more real & alive with Cash's unwavering baritone.

There is a line between the performer & the audience in any concert, but this one is all the more unique because that dividing line is also one between freedom & imprisonment.

To borrow a phrase from a major Cash hit--that, like most of his big hits up to that point, he didn't include in this show--the album walks the line between the performer & audience, which is to say between freedom & imprisonment.

The thing that binds them together across that line is the music--which, is to say, is America.
Posted by Eric Wolfson at 8:54 PM No comments: