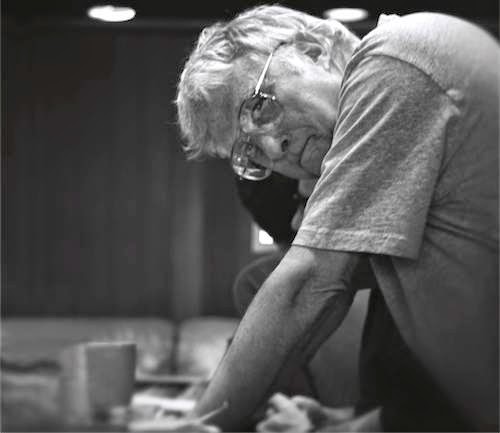 A little over a decade ago, literary scholar Christopher Ricks came out with a book called Dylan's Vision Of Sin, which reexamined Bob Dylan's oeuvre as it related to the 7 sins. It was a clever book, & critics were tripping over themselves with praise—& indeed, considering it was written by a guy who usually writes about folks like Ezra Pound & T.S. Eliot (fighting at the captain's tower?), it's a very readable book & the rare literary criticism that you can dip in & out of at your own leisure.

But let's be clear—this is ultimately a better idea than it is a book. This is not to slight the book as a volume, but rather to say that the idea is just that good. Just like its most striking moments ("Clothesline Saga" is sloth!), the book as a concept stays with you, long after you've put it back on your Dylan-packed shelf.

This is all just to say that although I hadn't touched the book in years, it was still rattling around in my head when I got the chance to see Randy Newman last fall play an intimate solo show at the Library Of Congress in Washington, D.C. Originally scheduled for October 5, the show was one of many things that had been shut down by the government shutdown, which sadly says nearly as much about the state of America as a Randy Newman album.

As Jonathan Edwards (the Puritan, not the former cheating vice-presidential candidate or the shticky daytime television spiritualist) once wrote, we are a nation of sinners in the hands of an angry God, & no other entertainer understands our sinning better than Randy Newman, a man who made his career in part on "Sail Away," about a slave-boat captain spinning his best Willie-Loman-in-his-prime sales-pitch to a bunch of unsuspecting Africans. "In America, every man is free," the slaver promises. "To take care of his home & his family." If there is a better pop song about the sick allure that drove America's original sin, I've yet to find it.

When Randy Newman graciously rescheduled the show for November 13, "Sail Away" was one of the songs he performed, with some twenty others. I decided not to force my whole "Randy Newman's Visions Of Sin" theory onto the performance, but rather wait to see if it came along naturally.

Newman came out & sat down to begin the first number, issuing a fluttering piano riff as he sang the words:

& there it was. Not even one verse in & Randy Newman's Visions Of Sin had begun.

Greed: It's Money That I Love.

More than any other song, "It's Money That I Love" predicted the Reagan Era. Released just on the cusp of the '80s, the song caricatured everything that was yuppie before the term even existed. The best—& weirdest—line comes towards the end:

As Greil Marcus memorably wrote, after scoring a surprise hit single, he was back on the margins, scheming.

Or, as Gordon Gekko might say, "Greed, for lack of a better word, is good."

That surprise hit single in question was this song, a satire of bigotry that was so stupidly sophisticated (or something), most people missed the irony altogether & embraced it as a sick novelty song.

The source of the confusion came with the tagline "Short people got no reason to live," a statement so bitter & cutting that not even the shimmering redemption of the bridge ("Short people are just the same as you & me") upheld by The Eagles' backing vocals could redeem it. Most of the lyrics are so outlandish, I had dismissed them years ago, but was caught by surprise to hear people laughing with the "They got little cars that go beep, beep, beep/They got little voices goin' peep, peep, peep" couplet.

In the end, it is the song of a man who draws a line around himself in an attempt to live in the world as he wants to define it & to hell with the rest. Indeed, his hatred for short people is not only what defines him, it is what turns his kingdom into a prison, unbeknownst to him.

Gluttony: The Great Nations Of Europe.

For all of the ink spilled about Randy Newman as a "funny" songwriter, there is very little that he has ever written about food. Compare this with, say, "Weird Al" Yankovic, who had already produced a food classic ("My Bologna") before he even scored a record deal (with which he soon churned out further food classics like "I Love Rocky Road" & "Eat It"; by the time he asked Kurt Cobain for permission to parody "Smells Like Teen Spirit," Cobain responded by asking if it had to do with food—but I digress).

However, "The Great Nations Of Europe" takes the sin of gluttony—that is, greedily devouring everything in sight—& applies it to, well, the great nations of Europe in the 16th Century, guzzling their way through the land in a gesture of carelessness & destruction:

There were natives there called Guanches
Guanches by the score
Bullets, disease, the Portuguese,
& they weren't there anymore

Is there any wonder the singer warns to lock up your wives & daughters, but to "Hide the groceries too"?

Lust: You Can Leave Your Hat On.

Perhaps the strangest Randy Newman classic-in-retrospect is this one, no doubt helped by film: First, by Joe Cocker's memorable rendition for the striptease scene in 9 1/2 Weeks, & then by Tom Jones' memorable rendition of it in the finale of The Full Monty, which oddly rendered it from a song about male sexual perversion to one about male sexual strength. Still, taken by itself—naked, if you will—the song is classic Randy Newman: A deceptively simple character study that gets weirder with every listen. At its heart (or lack thereof) is a man's patent denial that is spoken plainly:

I know what love is.

Sick, obsessive love & denial has long been a favorite topic of Newman, as evidenced by his artistic breakthrough 12 Songs, which contained "love" songs about planning to make love to a burning cornfield ("Let's Burn Down The Cornfield"), a stalker who finds a random woman's information in a telephone book & waits for her in the shadows ("Suzanne"), & a high school girl who gets run over & killed by a beach-cleaning machine ("Lucinda"). Taken in this light, "You Can Leave Your Hat On" may just be the lustiest one of all—after all, it is the only one in which the singer gets the girl.

Leave it to Randy Newman to address the sin of envy by dissecting the political philosophy of Karl Marx. After laying out the simple tenet at the center of Marxism—"no one could rise too high, no one could sink too low"—he spins a story for Marx that has nothing & everything to do with the situation: A recent school orientation day in which beautiful women were accompanied by ugly men like the singer. Quite simply, communism failed & capitalism succeeds because envy powers the slick machine. That is why the singer can say:

Just like I'm glad I'm living in the land of the free
Where the rich just get richer
& the poor you don't ever have to see!

There is a razor-thin line dividing pride & postmodern international diplomacy, & "Political Science" is written directly on it. The problem: No one likes us. The solution: Let's nuke them all to kingdom come:

Boom goes London & boom Paree
More room for you & more room for me
& every city the whole world 'round
Will just be another American town!

"Oh how peaceful it will be," the singer predicts. "We'll set everybody free." In those four little words, Manifest Destiny is reborn in Randy Newman's twisted patriotic paean—as Manifest Irony.

Sloth: I Think It's Going To Rain Today.

Throughout the entire concert, the man next to me was gunning for Newman to sing "I Think It's Going To Rain Today." After the mushroom cloud of "Political Science" cleared, he got his wish. "I Think It's Going To Rain Today" is one of the most celebrated of Newman's standards, but like much the record it first appeared on (his self-titled 1968 debut), I felt like I should like it more than I do, which is to say, I always found it kind of boring. Or maybe that's the point.

Right before me, the signs implore me
To help the needly & show them the way
Human kindness is overflowing
& I think
It's going
To rain
Today.

Correlating the link between depression & rain is nothing new, but what "I Think It's Going To Rain Today" adds to the picture is a version of sloth: Help the needy? No can do. I think it's going to rain today. It is life as a self-fulfilling prophesy, dark clouds that never part because the focus is not on whether they are there or not, but rather, the thought that they will be.

As the self-proclaimed "Dean Of Rock Critics" Robert Chistgau once wrote, "I want to say that what distinguished Randy Newman from the more popular rock artistes of the sixties was that he was smart. But it's possible all I mean is that he was Jewish." After all, it was another sixties Jewish rocker, Bob Dylan, who once noted, "To me, someone who writes really good songs is Randy Newman is Randy Newman...not that many people in Randy's class."

Indeed, reflecting on the evening, it is Newman's vision/version of an Old Testament God that shapes his entire perspective. No song expresses this better than his ultimate vision of sin, "God's Song (That's Why I Love Mankind)," which is unlike any other song of wrath ever recorded:

As he has been doing for years, Newman plays the song faster than it appeared on the initial record, which only emphasized its matter-of-fact cynicism over a deadpan blues. But in it, his catalog takes shape, as it helps to define the rest of the songs he performed that evening: The telling reminder of God's vengeance through the flood of "Louisiana 1927," the drunkard's afterlife visions of "Harps & Angels," the smug, secular self-satisfaction of "My Life Is Good." Even the optimistic songs—the beautiful love song "Marie," the Toy Story bromance of "You've Got A Friend In Me"—can be seen as the proverbial shelter from the storm.

Towards the end of a short Q&A session following the concert, the interviewer asked Newman if he'd like to answer a few more questions. He said no. But he would sing another song, if there was something we wanted to hear. The crowd started shouting favorites, including, much to my surprise, "Feels Like Home," a sentimental love song that may be the most perfect thing he ever wrote. I joined in the shout for the song & he received it, nodding his head in agreement, & saying, "Okay, 'Feels Like Home'."

In Dylan's Visions Of Sin, Ricks writes not only about the seven sins, but of the four virtues & three heavenly graces. I wish I could say I heard those in Newman's songs, but I don't really, except for this one, which seems to take all seven of those virtues & graces & puts them into one work of simple, shimmering beauty.

After bringing us through the Inferno, the Purgatorio, & most of the Paradiso, Dante is famously at a loss of words when he finally sees his vision of Beatrice. The most beautiful things, it seems, elude description.

This is how I felt about hearing Randy Newman sing "Feels Like Home" on this evening. I had experienced other moments of beauty at concerts—Elliott Smith singing "XO (Waltz #2)," Fleetwood Mac singing "Landslide"—but this one was the most beautiful, the most powerful, the most emotional.

It served as a reminder that if sin is best described in its complexity, virtue is best realized by its simplicity.

In other words, it feels like home.
Posted by Eric Wolfson at 9:39 PM No comments: